Tripe Marketing Board chairman Sir Norman Wrassle has written to the producers of the popular ITV show I’m a Celebrity – Get Me Out of Here! with a warning not to portray tripe in a negative manner, as news leaked out that the programme was set to feature the food in one of the Bushtucker trials. 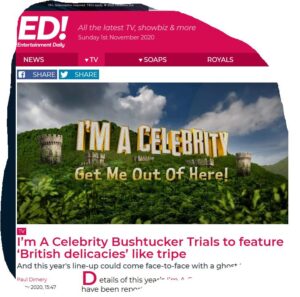 The programme – in which minor celebrities living in a jungle are forced to share each other’s company whilst undertaking grueling tasks in a bid to lift the I’m a Celeb title – is this year being shot in Wales, due to Coronavirus restrictions.  It is understood that filming was delayed for months as producers struggled to find enough celebrities who were capable of socially distancing.

Sir Norman said he feared the show could be a case of ‘life imitating art’.   The Tripe Marketing Board had to deal with a major PR disaster in 2009 when vegetarian model Katie Cutprice collapsed and had to be put on a respirator when she was forced to eat a plate of tripe as part of the Foul Food Challenge on the popular Spatchcock TV programme, I’m Famous — Put A Wasp In My Mouth. She swore so much that at least two elderly viewers collapsed and the programme had to be taken off air for 20 minutes. Subsequent series dropped tripe in favour of elephant testicles and snake vomit. Skilful media management by the TMB at the time meant that this unfortunate episode wasn’t allowed to interfere with the tripe renaissance.

In his book The Lost Films of 20th Century Spatchcock, TMB resident historian Dr Derek J Ripley recalls how I’m Famous – Put A Wasp In My Mouth was a long running series in which minor celebrities spent twelve weeks in the Forest of Bowland in the middle of winter, wearing only loincloths. They were forced to forage for food (on one occasion resorting to cannibalism) and try to regain popularity with the public by competing against each other in all manner of humiliating tasks such as water torture and drinking tripe smoothies. Producer Alfred Spatchcock took great pride in the fact that in the show’s twenty year run, only two celebrities died.

Sir Norman said that, although he was worried at the potential fallout if millions of viewers were exposed to tripe in its naked form, the TMB would make sure the image of tripe wasn’t tarnished, and the programme was a chance to showcase tripe.  “We have lots of experience of presenting tripe with its make up on,” he said, adding that the TMB would be lobbying some of the celebrities due to appear on the show beforehand. “I am sure Vernon Kay has seen tripe before now, even if some of the others haven’t,” Sir Norman said.