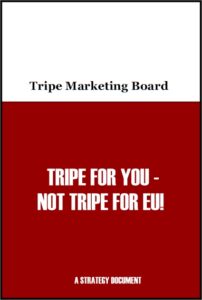 The Tripe Marketing Board has sharply upgraded its forecast for UK tripe sales, predicting that tripe  output will expand as fast this year as it did last year and that sales will be much more buoyant than previously suggested.
The prediction comes after the launch yesterday of a new strategy document Tripe for You, Not Tripe for EU, when TMB chairman Sir Norman Wrassle said the tripe industry was at a turning point and that 2021 could see the first increase in UK sales since 1954.

“It’s too early to tell, but the indicators are all there,” Sir Norman said, adding that retailers had reported the smallest ever decline in quarterly sales in the autumn. “This means that fewer people than ever before are turning away from tripe and it could well mean that sales will actually increase at some point next year,” he said.

The strategy document predicts that, as exports to EU countries decline after Brexit, the home market will become increasingly important. “Unless they are over 75, people will literally have never seen so much tripe as they will after January 2021,” Sir Norman said.