Review of the Year – Tripe Marketing Board

Review of the Year 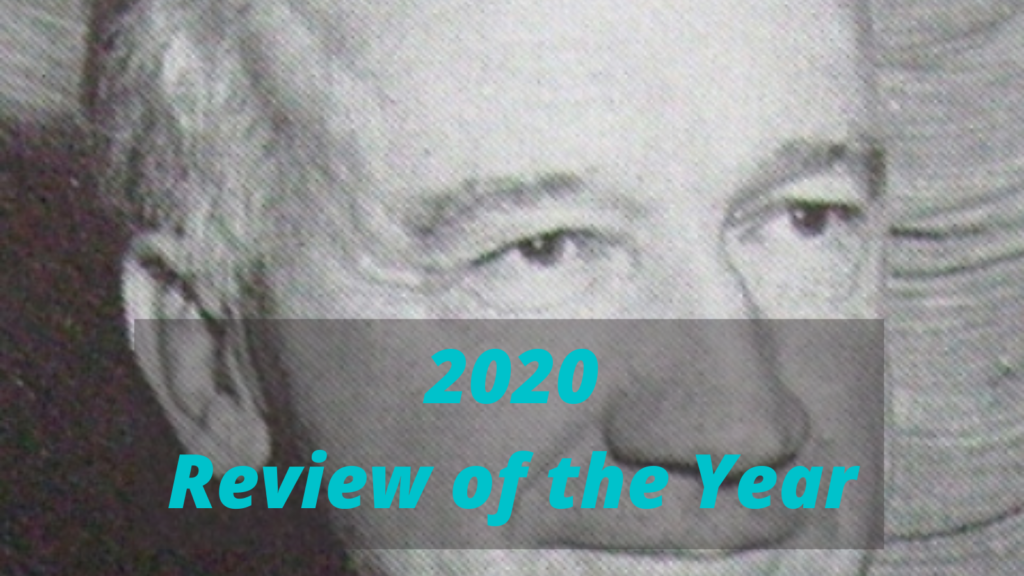 The TMB’s Chairman Sir Norman Wrassle looks back on a year of tripe.

The last twelve months have been ones in which the Tripe Marketing Board can be said to have truly consolidated its position as ‘Europe’s favourite meat-based marketing board’.  As is customary, I would like to take the opportunity to reflect on some of the highlights in the world of tripe during this time.

As the UK prepared itself for Brexit, we were positioning tripe as ‘the food that would never be rationed’. Brexit has been a very divisive process for the country but, through all its ups and downs, I have always seen it as our role to reassure tripe consumers that we had their backs.

Our ‘Relax’ video on Twitter has been viewed over 42,000 times and won a number of accolades, so I’m pretty sure that was ‘mission  accomplished’. 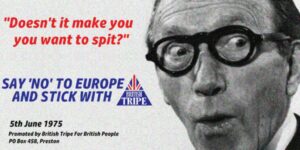 In previous discussions about Britain’s role in Europe, the tripe industry took a stronger line and it’s perhaps worth reminding ourselves of the nature of the sometimes febrile debate. Our predecessor, the British Tripe Council, took a lot of flak when it hired the popular St Helens music hall comedian Arthur Doorkey to front its ‘Stick with British Tripe’ campaign during the 1975 referendum.

This time around, I was  determined not to make the same mistakes and insisted we plough a more neutral furrow.   Our detailed research showed that, whether the UK stayed or left, sales of tripe would fall.  That led me to go with my instincts and appeal to the public to buy more tripe, however they were voting.  I still think it was the right call.

For so many reasons, 2020 has been one of the most remarkable years I can recall.  On behalf of the board I usually undertake an exhaustive series of fact-finding visits to develop our knowledge of tripe around the globe. Over the last year, these have been somewhat curtailed, although I did manage to visit Porto and the  Greek mainland.  My full and comprehensive reports have, I hope, hugely advanced our understanding.

There are always knockers and critics ready to have a go at my fact-finding trips, with some even having the gall to suggest that they are invariably to sunnier climes. Thankfully, I could consult previous years’ diaries which showed that over the last five years I have been obliged to visit not merely Spain, the Canary Islands, Madeira, Portugal, Italy and Greece but also Romania, the Czech Republic, Slovakia and Lithuania. I’ve also been accused of  ‘frittering away’ funds that would be better spent on promoting tripe., but this, too, is utter nonsense.  A small endowment from the widow of a former prominent tripe dresser stipulated it should be used expressly to collect facts about tripe.

It is sometimes challenging work and not for the faint-hearted. I was wearing masks (during visits to abattoirs) long before they became fashionable.  I like to think that, due to my diligence, we now know more about tripe across the globe than any other meat-based marketing board.

It was with a heavy heart that we took the decision to close our Yorkshire sub-office. Our Preston office has, of course, been the hub of our work since the early days of the Association for the Legal Disposal of Unwanted 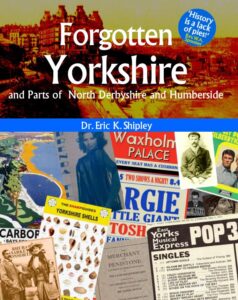 Cow Products.  When we opened the Barnsley office in 2017, there were plenty who criticised us, but I for one had high hopes that by extending an olive branch across the Pennines we could consolidate our position as the north’s favourite offal.  Some said it was merely a sop to help promote TMB Books’ publication of Forgotten Yorkshire and Parts of North Derbyshire and Humberside, but an organization of our size does not make the decision to open a sub-office lightly, I can assure you.

In the event, we found that it wasn’t really necessary to have a base in Yorkshire.  It was enough – and much, much cheaper – merely to take on a couple of interns with Yorkshire accents.  We are committed to keeping the situation under constant review, however, so who knows? We may yet re-open our Yorkshire base again.

THE YEAR OF TRIPE

In December 2019, we asked ‘Will 2020 be the Year of Tripe?’  Those who know the TMB will realise we have been campaigning for an official ‘Year of Tripe’ to be designated for some considerable time now.  Even so, I think even I was overwhelmed by the speed of events this year – so much so that we were obliged to suspend the campaign at the end of April.

No review of the last 12 months would be complete without reflecting on what has been the single-most important development to affect the tripe industry: the unveiling, during the summer, of our new website.

When the TMB first took to the internet in 2012, we were proud of our website, which was designed by my young nephew Karl Wrassle.  It was simple, unassuming and had a rare elegance about it, but above all it didn’t cost us a penny.  Times change, however, and one of our regular focus groups told us it needed a refresh.  In particular, the shop needed a revamp as purchasers had found it clumsy to have to return to purchase multiple items.

Well, that’s all changed and now anyone is free to be able to buy as much as they wish.  Visitor numbers have more than doubled, so that now it is an unusual day when there aren’t a dozen people on the site.

I would like to take a moment to thank the TMB’s followers on social media for their continued generosity towards the charities we have supported.  Sometimes we have had to adopt what some might see as rather ‘unusual’ strategies to pry donations from their hands and wallets – such as when we set up a ‘Crowdfunder’ to assist MPs with their childcare costs.  This came after Chris Leslie MP appeared to suggest that MPs  should be recompensed for costs incurred during a particularly long Brexit debate in October 2019.  By such means we were able to secure the wonderful sum of £604 which was sent to the Liverpool-based children’s charity, KIND.   Meanwhile, our ever-popular #MSisOffal campaign for the Multiple Sclerosis Society has now raised over £3000 (including Gift Aid) since it was launched via Just Giving.  The tripe community is truly a wonderful one.  We have supplemented this with additional direct donations from to the MS Society via our publishing arm, TMB Books.

This year has seen Tripe Club really come into its own.  When I took the decision four years ago to re-launch an organization that had been a mainstay of the tripe industry in the 1960s but which had somewhat fallen into decline, there were those who scoffed.  Why would anyone be interested in joining what had essentially been a children’s club promoting tripe? Well, one of the proudest days of my life was when Tripe Club was formally re-launched at the Theatre Royal, Drury Lane.  In the short while since then, Tripe Club has enrolled over 250 members all around the globe, including a smattering of minor celebrities.

This year also saw the re-emergence of that popular fashion item, the CHOOSE TRIPE t-shirt after many years of absence.

We were pleased to recruit fresh, new blood to our board this year – including our first ever representative from the canine community. We will continue our search for those of the right calibre to represent tripe as we develop the board in new ways in the months ahead.

World Tripe Day was another venture which many people sneered at, but my view had always been that tripe deserved its day on the international calendar of food as much as porridge, eggs and sushi.  Over the years since it was launched in 2014, it has steadily become a focus for the celebration of our fine product. Inevitably, many people celebrated the great day ‘virtually’ this year, which was a wonderful step forward into the 21st Century for tripe.

TMB Books is our own publishing house – in actual fact, more a publishing maisonette, if truth be told. It has worked valiantly to put tripe onto the bookshelves of Britain since it was founded in 2012. This year, its profile has beeen raised by the decision to recommence making our TMB Diary available to the wider public, as well as a bizarre decision by online retailer Amazon to discount one of its books, Forgotten Yorkshire.  When I learned of this, I immediately instructed our social media team to go ‘Full Yorkshire’ for the duration of the discount, and committed the TMB to making a donation of £1 (later raised to £2) to our chosen charity, the MS Society, for every copy of the book sold.  In the space of just 14 days we believe around 1000 copies of Forgotten Yorkshire have been distributed across the UK and further afield, really putting TMB Books on the map while raising what we believe is over £2,500 for the MS Society.  Final figures will be available early in the new year.

Last but not least, the TMB was swift to recognise the potential for the global spread of Covid-19 to hugely disrupt tripe sales by impacting on our supply chains.  Nevertheless, I have encouraged the tripe industry to look on the positive side. A lot of people found themselves at home for a sustained period and, to avoid spending time with their partners,  were experimenting with new  endeavours and hobbies such as painting, learning an instrument and – which is where we come in – cooking.   We have been able to turn the situation to our advantage, by developing a series of new recipe cards which we will shortly be making available via our website and selected tripe retailers across the land.

Every cloud has a silver lining, and every cow has a stomach lining.  In fact, they have four of them, which puts us at something of an advantage over marketing boards promoting other products.  For that reason, I know that we’ll ultimately have success if we continue to share our core message during 2021:

Give tripe a try – but do so in a safe and socially-distanced manner!’

On behalf of our board members, staff and volunteers, may I take this opportunity to wish you all a safe and healthy 2021.