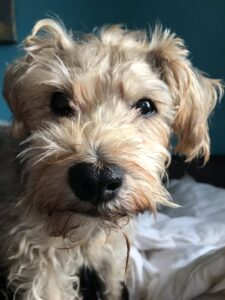 Round 3 of the Grand Final of TripeDog – the internet contest to find the next canine face of tripe – was suspended earlier today after the voluntary withdrawal of one of the candidates.

The owner of 13 year-old Doris Malula, who had attracted a remarkable 35% of the votes cast in the previous round, said Doris felt that the contest had been going on too long, and that people were ‘getting fed up’.  She also felt that the way Round 3 had been framed was confusing to many people who had voted.

TripeDog 2020 is being run over a total of four rounds, with the votes from each being tallied to determine the overall winner.

Round 3 asked voters to choose the dog who was most likely to sell their ‘kiss and tell’ story to the media, but indicated that any votes cast would be deducted from the overall tally.

The TMB’s Head of Competitions Sam Frascati said, “We’ve seen what happens in other contests of this nature and thought it was important that we reduced the risk of a winning entrant going on to sell their stories to the press, and possibly besmirching the good name of tripe.”

Mr Frascati defended the unusual framing of the poll for Round 3, and said that the reason the contest was taking so long was by popular request, as TV schedules were “very poor” at the moment, meaning people were looking at alternative things to do.

The contest resumed later with the three remaining candidates.

TMB chairman Sir Norman Wrassle said we wanted to thank Doris for the fight she had put up to emerge as one of the country’s top 4 TripeDogs, out of a huge field of more than 130 entries. He said he understood why Doris might feel the contest was taking an unnecessarily lengthy time, but said it was important for any future TripeDog champion to have the stamina and fortitude to outlast such ordeals. “None of this takes away from the fact that Doris is a lovely girl,” he said.

Profiles for all of the remaining candidates can be found here.

You can vote in Round 3 here, until 24 October.