The Tripe Marketing Board has alerted tripe retailers that its latest Diary will be published on 1 November 2020, and asked them to prepare for a surge in tripe sales in the run up to Christmas. 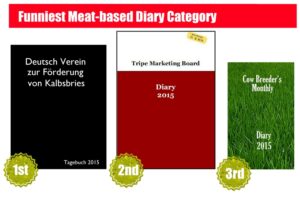 TMB chairman Sir Norman Wrassle said he had high hopes for this year’s diary – made available to the wider public for the first time in five years.

Speaking during an interview with Goole Hospital Radio, Sir Norman said he was confident the public would take to the new publication: “We came a tidy second in the Book Trade Awards Funniest Meat-based Diary category in 2015, and this year there’s every chance we’ll beat the Germans,” he said.

He described pre-publication orders for the Diary as “encouraging”, and said sales had been brisk in Scotland, East Anglia and parts of the south west, as well as in the TMB’s traditional heartlands of Lancashire and Yorkshire.

This year’s Diary breaks new ground, with a ‘behind the scenes’ look at the TMB, and at 176 pages is over 14% thicker than the board’s previous diaries.  It includes a full account of the controversies that surrounded this year’s TripeDog contest, Sir Norman’s review of the year to the board, a look at how the TMB uses focus groups and an analysis of our campaigns to promote tripe.

“This Christmas, I can imagine a lot of people waking up to some surprise tripe in their stockings!” Sir Norman said, adding “I like to think of all those little eyes lighting up when they see it.”

Sir Norman said the board was looking at organising a ‘Zoom book launch’ early next month, once the TMB’s technical staff had worked out the logistics of preventing vegan hackers from disrupting the event.