Tripe Marketing Board chairman Sir Norman Wrassle has reacted angrily to news that the TMB has been refused permission to air its 2021 Christmas TV ad by OffOffal, the tripe industry regulator. 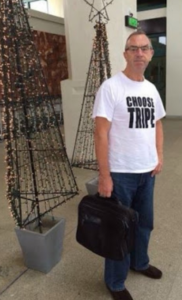 The advert, which features former Lancashire and England cricketer David Lloyd and takes the theme of ‘Choose Tripe this Christmas’, was to have aired primarily in the North West, North East and Yorkshire over the next week.

Lloyd, who had an extensive playing career, with 407 first-class matches and 288 one day games, is a well-known lover of tripe and has regularly discussed his passion for the product during quiet times in his commentaries for matches on Sky TV.

Sir Norman said: “This is more than disappointing. We had high hopes for this advert, which took a modern and upbeat approach to tripe and was deliberately designed to appeal to the under 65 audience.”

He said the TMB was considering releasing the advert in selected cinemas as an alternative. “It would be a real shame if this never made the light of day,” he added.

Despite the ban, the TMB’s Choose Tripe t-shirts continue to sell well in the run-up to Christmas. “I can see a lot of folk wearing these in 2021, which certainly bodes well for tripe next year,” said Sir Norman.