TMB Christmas Appeal for the MS Society – Tripe Marketing Board

The Tripe Marketing Board launched its annual Christmas Appeal for the Multiple Sclerosis Society on Tuesday 15 December, and an estimated £1600 was raised in the first eight days! 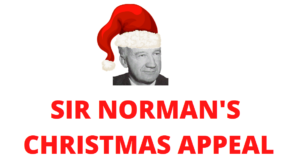 A mixture of donations and commission from sales of the TMB’s Forgotten Yorkshire book sold on Amazon meant the race was then on to raise as much as possible before Christmas.

The TMB responded by doubling its donation from an initial £1 per copy to £2 per copy sold. Every time someone bought a copy at 99p from 22 December onwards, the TMB would donate £2 per copy, up to the maximum of £6 when three copies were bought.  As sales figures come in, the TMB is expecting the overall figure to rise to around £2500.

Sir Norman had hoped to see Forgotten Yorkshire at the top of the Amazon Parody Chart by Christmas Day. “It’s always been a personal dream of mine to have a Christmas No 1, but I didn’t really cut it as a crooner, so this will be the next best thing,” he said.  In the event it peaked at No 8, jostling with such big boys as the Viz annual, the Haynes Guides and the parody Ladybird books. For a whole week it was the only independently published book in the Top 20.

The TMB’s followers on Twitter and Facebook responded in droves, and additional donations have been made via the TMB’s #MSisOffal Just Giving page at https://www.justgiving.com/fundraising/tripe-marketing-board

Sir Norman described the TMB’s supporters as ‘the best any meat-based marketing board had ever had’.  It’s board members, voluntary staff and Tripe Club members have worked tirelessly to extract cash from friends and family to help support the appeal.

Sadly, Amazon ended their offer at around 6.30am on Wednesday 23 December, bringing to a halt the TMB’s plans to raise even more cash for the MS Society (Audience: ‘Hiss! Boo!’).

Thank you for your support!