TMB may rebrand to secure museum’s future – Tripe Marketing Board 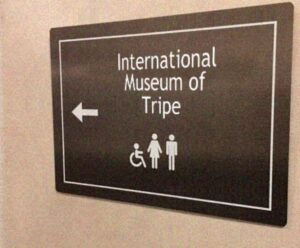 Speaking to a Zoom meeting of the Westhoughton Ladies Circle earlier this afternoon, Sir Norman said, “When you study the list of the awards, it shows, once again, the discrimination against people who live in the north.”

Pointing to the lengthy list of grant recipients, Sir Norman railed against some of the choices that had been made, adding “Don’t get me wrong. I’m very pleased that the Postal Museum in Camden has been awarded £860,000, but tripe has been around for a lot longer than letters and we’ve been awarded nothing.”

Sir Norman said that the museum had been struggling since lock down, with fewer than five visitors most weeks, despite a vigorous advertising campaign in cinemas across the north west.  Sir Norman did not rule out the possibility of the museum having to close: “It would be tragic to lose it,” he said.

The Museum’s ‘Hall of Aprons’ houses 32 different tripe-dressers’ aprons and there are over 15 exhibits from all around the globe, including a Durham miner’s lunch ‘trox’ – a purpose-designed box with separate compartments for tripe, salt and vinegar.

Sir Norman said he had been heartened by the public interest already shown in the TMB’s 2021 Diary, which is available for pre-sale now and which will be formally published later this month.

Sir Norman concluded by saying, “People sometimes sneer at tripe, but if that’s not culture, then I don’t know what is.”

The TMB has not ruled out a legal appeal, or rebranding as a consultancy company, in an attempt to secure government monies for the museum.