The Tripe Marketing Board has revised the contents of its Tripe Club membership pack following extensive feedback from members recruited over the past twelve months. From today, all new recruits will receive additional materials to add ‘intrinsic user value’ to their membership.

The new items include bookmarks, a recipe card, a ‘travel tips’ card and – for the first time – a membership card. 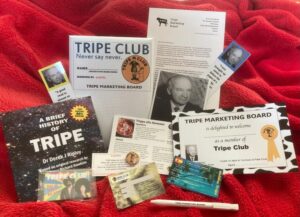 TMB chairman Sir Norman Wrassle said that when Tripe Club was re-launched five years ago, the contents of the pack had been debated at length by the board, who had settled on a membership badge, a copy of A Brief History of Tripe, a signed photo of Sir Norman, a fridge magnet and a TMB pen.  Since then, the TMB had realised it had a number of additional items available in its warehouse, and it was felt that adding these to the pack would increase the perceived value of membership.

Sir Norman said he wanted to assure prospective new members that it was “not just a case of us clearing out stuff from the office,” but that he thought members would enjoy the additional items.  “The recipe card is actually one of a set we are producing early next year, so it gives new Tripe Club members a chance to try them out,” he said.  He said the bookmarks were left over from the now defunct Tripe Book Club days, but might still be useful to people.

Lifetime Membership of Tripe Club will remain at £9.99 despite the enhancements to the pack, although Sir Norman said the TMB has not ruled out a price increase in the future.  “My golf club has increased its fees annually over the last five years, so we think Tripe Club would still be remarkable value at twice the price,” he said.