Tripe’s ‘centre of gravity’ may be moving, says TMB chairman – Tripe Marketing Board

Tripe’s ‘centre of gravity’ may be moving, says TMB chairman

Tripe Marketing Board chairman Sir Norman Wrassle has claimed that tripe’s ‘centre of gravity’ may be on the move, as preliminary sales figures for the TMB’s 2021 Diary show a huge switch away from the tripe heartlands of Wigan and the north west. 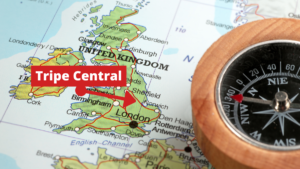 Early forecasts suggest that sales of the diary – which have long been an industry proxy for tripe sales – have rocketed in the Glasgow, Edinburgh and East Anglia areas, prompting Sir Norman to hail the development as ‘tectonic’.

“These are early days, but it does seem as though sales have been robust in central Scotland and the Norwich area.  This can only be good news for tripe,” Sir Norman said.

The boost in Scotland has been attributed to the success last month of Peepee the Aye Chihuahua in the TMB’s TripeDog 2020 contest, while the strong showing in East Anglia may be due to circulation on social media of an iconic photo of popular comedians Eric Morecambe and Ernie Wise eating tripe at a Great Yarmouth market stall in the 1960s.

Sir Norman said he would be asking his board to consider the implications for the future of tripe promotion and did not rule out the opening of a Norwich branch office. “We’ll never turn our back on Lancashire – but perhaps it’s time we embraced other parts of the country in our quest to promote tripe,” he said.

The TMB maintains fraternal relations with Scottish Tripe, an independent tripe promotion agency in Scotland, and Sir Norman said they would lend every assistance possible to growing its influence.